Instructions to the King 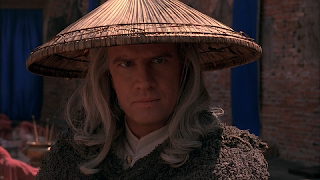 Return of the King was the last segment in the Lord of the Rings trilogy. In preparation for the return of the King of Kings Solomon wrote his words of wisdom in the book of Proverbs. My favorite is withhold not good from him to whom it is due when it is in the power of thine hand to do it. Second only to it is better to dwell in the wilderness than with an angry and contentious woman.

Back in Ireland there was an ancient king named Cormac MacArt who wrote his advice to his son in a book called Instructions to the King. Originally written in Irish, I have a copy of an English translation. It talks about truth. It talks about justice. It also states crush not the miserable after you have conquered him. That is what I want to talk about.

In the movie a Knights Tale the hero showed mercy and the villain claimed mercy was a sign of weakness. Not so. After you have conquered an enemy, there is no need to crush him. Torture is something that we do not do. Ever. There is no cause that justifies it. We are different than our enemies. We are better than that.

It is pretty clear that what Norm Cocks and Rob Thomas did to Dain Philips was cheap and dirty. Their character has been revealed. They showed no mercy. As a result, the Hells Angels have pulled their support and they have both been beaten up in prison. Thomas' lawyer said in court that Thomas has been hospitalized three times during his incarceration and that his prison sentence has not been kind to him. Many will cheer and say he deserves it. Perhaps. Yet in the words of Raiden from mortal combat I declare Enough. He has had enough.

If he starts bragging about what he did, then by all means give it to him. Yet if he recognizes what he did was wrong and realizes the club he thought he was defending has betrayed him and left him on his own, there is no sense in crushing the miserable. Let him serve his sentence and live with what he has done. We do not torture our prisoners. We are better than that.

Murder is something that someone can never repay. Yet people can change. They can stop the violence and refrain from it. Rehabilitation is not the primary concern in cases of murder yet it is on the table. First the murderer is separated from society. That is the natural consequence of that behavior. That is the first step. Stopping the violence on the street. Likewise when I see the predatory violence outside the Front Room where drug dealers are brutalizing the homeless I declare enough. That violence must be stopped. We cannot support that any more.

Violence begets violence. In the words of Martin Luther King violence as a way of achieving racial justice is both impractical and immoral. It creates bitterness in the survivors and brutality in the destroyers. Yet force is often needed to defend liberty. There is a difference between force and violence. Everything has it's time and place. The time for the violence to stop is now. Enough.