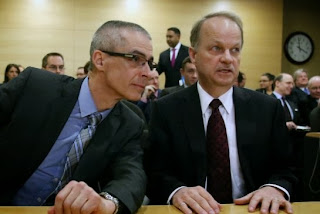 Mississauga.com is reporting that John Forster, the head of Canada's eavesdropping agency says a controversial effort to understand airport wireless systems did not breach the privacy of Canadians. In the printed edition of today's Vancouver Province he denied they broke the law. He lied. Again. That's perjury. He should be in jail. The very mandate of the CSEC is illegal. It is mandated to break the law by violating the Charter of Rights.

This is the third recent public lie John Forster has perjured himself over. He previously claimed that the agency is not allowed to ask its allies, including the U.S. National Security Agency, to eavesdrop on Canadians or anyone in Canada, either. But they do! Edward Snowden proved that is a bold face lie. He also lied when he said their activities in Brazil were legal. He should be put directly in jail with Michel Columbe. Arrest them both now. Charge CSIS for Air India as well. That's no conspiracy theory, that's CBC.