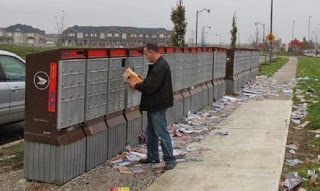 The Surrey Now is reporting that a Surrey man has been busted in connection with a “significant forgery lab” where more than 500 potential victims have been identified in the bags of stolen mail seized by police. Forgery equipment was also seized. Benjamin Best, 27, of Surrey has been charged with personation.

It's another example of a prolific offender. How one criminal can be responsible for a huge amount of crime. Another timely concern given Canada Post's unilateral decision to take everyone off door to door delivery and put them on mailboxes. The security of the Queens mail so to speak is indeed put into question. Do the public have a say or not?