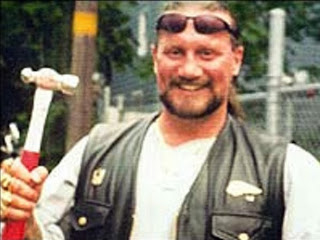 Years ago MC Hammer was famous for a fun but goofy song called Hammer Time. Sadly the concept has now taken on a dark new meaning. This is a picture of Greg Domey, the former president of the Salem Massachusetts Hells Angels and the former East Coast president. He's one of Sony Barger's friends in jail for traficking crystal meth on behalf of the Hells Angels.

Notice he's holding a ball peen hammer. This is what bikers use for discipline in the east coast of the US. In Winnipeg Sean Wolfe and Tiny Mac were charged with pulling a gun on a kid and beating him with a hammer. More recently, two Kelowna Hells Angels were convicted of beating Dain Philips to death with baseball bats and hammers.

Hitting someone in the hand with a hammer could be seen as discipline. It is painful but nonlethal. Like back in Ireland how the IRA would kneecap people. They would shoot them in the knee as a form of discipline. Painful but nonlethal. Hitting someone in the head with a hammer is a lethal attack. It is done with the intent to commit murder. Bragging about that is deranged.

Especially since in the Dain Philips murder it was done because one Hells Angel was afraid of Dain and ran away from him. He hid in the truck with a bunch of guys and came out after Thomas had dropped him with a baseball bat only to hit him in the back of the head with a hammer. It was a total B*tch move. It's like Joey Verma bragging about shooting a girl in the back.

It gets worse. As we approach the first anniversary of the brutal murder of Janice Shore, we need to reexamine that horrific assault. She was beaten into a coma December 2nd 2012 and died in hospital February 18th 2013. There were a lot of stories going around about the brutality of that assault. One witness claimed her eyes had been poked out. When I visited Janice in the hospital, she was unconscious. Her right jaw and her left temple were caved in. I wondered what would have caused those injuries. It had to have been some form of blunt force trauma.

Then when I was visiting the Front Room, someone dropped something on the floor and a worker said no weapons allowed. I looked to see what it was and saw that it was a hammer. That's when the light went on. A hammer would have caused those injuries. No doubt it would have been a brutal reminder of who she owned her drug debt to. That is why I have been focusing on the predatory nature of the drug dealers outside the Front Room in Surrey who are bullying and brutalizing the homeless there. This hammer thing has to go.

Bragging about beating a polite, soft spoken frail homeless woman in the head with a hammer is absolutely deranged. When you wear support gear, that is what you are doing. Mark my word, that aint me. Reporting a deviant like that to the police isn't being a rat. Failing to do so is.

Today some First Nation Elders who initially placed a prayer tie in the tree are having a four day fast on the site Janice Shore was murdered at (105 A Avenue and 135 A Street) to raise public awareness of the brutality of the event and to perform a spiritual ceremony in her honour.

Speaking of hammers, a blog reader sent in this picture of Lorne Carry of cranbrook posing with a hammer. Lorne Carry, Lonnie Adams and Colin Correia were all convicted by a jury of counseling to kill rival drug dealer Doug Mahon in 2009. Doug Mahon had earlier been charged after a shooting in front of the Sam Steele Hotel on Oct. 29, 2009. The victim was Munroe, who once was convicted of causing a disturbance at Big White along with Mission Hells Angel Jason Arkinstall. 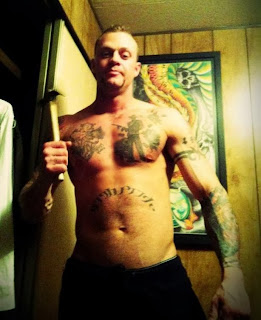 Posted by Dennis Watson at 6:13 AM