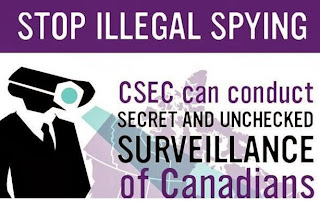 This is somewhat ironic. Opposition MPs grilled the Minister of Defense over the latest Snowden leak showing that CSEC randomly spied on Canadians over airport wifi. CSEC came right out and lied claiming there was no evidence proving they do it. Yes there is. The Snowden document.

CBC is reporting that "under repeated questioning by opposition MPs on Friday, Defence Minister Rob Nicholson didn't directly deny the story, but said that the document detailing work by the Communications Security Establishment Canada (CSEC) doesn't show that Canadian communications were targeted or used."

Let's list the ironies present in this story. First we have the bold faced lying of the CSEC and the Minister of Defense. That is perjury which is a criminal act all in itself. Charges should be laid for perjury alone. Charges also need to be laid for the violation of the Canadian Charter of Rights and the breach of civil liberty. Those two sets of charges need to be laid right now.

The irony is the fact that it claims opposition MPs were grilling the minister of Defense over it's illegal activities. Which opposition MPs? We know the NDP oppose this practice. Yet the story claims Trudeau's Liberals are opposing it as well and will move that the government "immediately order CSEC to cease" all illegal monitoring of Canadians and "increase proper oversight" through a committee of parliamentarians.

That's a little bit of fresh air since Trudeau's liberals previously voted in favor of Harper's bill to throw away the Charter of Rights Justin's father gave us. Yet we must understand who is really supporting the Charter of Rights and who is opposing it. Be not mistaken that we are indeed talking about illegal activity. This isn't just a controversial program. It is illegal.

The ultimate irony is the very existence of the Communications Security Establishment Canada (CSEC). This is a criminal organization. It's mandate is to break the law and violate the Charter of Rights. It's very mandate is illegal. That means this whole body needs to be disbanded for two reasons. First is the fact that it is illegal. Second is the fact that it is not fiscally responsible and is burning tax dollars to break the law.

CBC Radio is reporting on a National campaign to oppose Harper's new illegal bills to promote warrantless surveillance of the internet claiming CSEC is reckless, out of control and unaccountable. Again the key word is illegal. These bills need to be challenged in the courts because they violate the Charter of Rights. We also need to remove all politicians that support them. Even Stockwell Day is speaking out against some of these practices. That's because he used to be Reform before Harper merged with the Mulroney Time Warp.

Posted by Dennis Watson at 3:53 AM