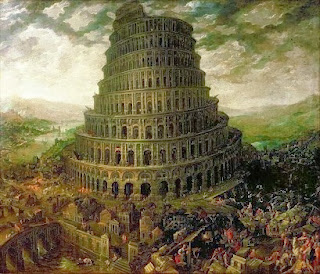 The Vancouver Province is reporting that Dianne Watt's tower of fiscal irresponsibility is scheduled to open on Monday. All hail Godzilla. Surrey's own Tower of Babel. This is why we can't afford police in Newton. $5 million for furniture alone. What is the real price tag anyways? We know it's more than what they claimed. The problem is this is not fiscally responsible and neither is Dianne Watts. That's why she wants to toll everything under the sun. To pay for all her trips and her ivory tower of self indulgence. It'd be cheaper to rent out the ULounge after hours for their special events. One local Newton resident thought this was a total waste of money. I agree.

“A few years back, Surrey spent $19 million upgrading city hall, which has been at the same location since anyone can remember. It has served us well and should remain where it is. But Watts just flushed $95 million on a new city hall that was not needed and is a waste of our taxes. That money could have gone a long way toward extra policing and cleanup of Newton. It might have even saved the life of Julie Paskall.” Indeed. They should keep the old city hall and lease out the new one as an investment. That would make more sense then tolling every bridge under the sun.

Black marble walls and Dianne Watts has a penthouse suite with a balcony. That is abominable.

Another concerned citizen wrote in to the Surrey Now and said: "The mayor has the wrong priorities. Surrey has the money to hire more officers, but Watts has chosen to spend big money on other projects, such as a new city hall." No doubt Alex Tsakumis would call this person a whore too for caring more about the community than Dianne Watt's ivory tower of self indulgence.

The Surrey Leader is reporting that the Ivory Tower will cost more like $150 million including interest. Since the city is borrowing the money they will be paying $2 million a year in interest. That's a lot of money for Dianne Watt's penthouse suit with a balcony. I still think it's be cheaper for them to rent out the U Lounge.