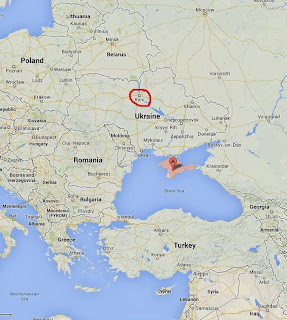 This one's kind of hard to follow but is clearly contentious. We have been hearing quite a bit about unrest in the Ukraine. We heard news of protests in the Ukraine over the government's bid to go back to Russia and protesters getting shot at. It would seem that clearly the majority of people in the Ukraine do not want to be a part of Russia again. Fair enough.

Then Russia invades Crimea, a peninsula off of the Ukraine but separate from it. They say they went there to protect the Russians living there. Yeah right. Then they say they're going to hold a referendum on who wants to break off of the Ukraine and join with mother Russia. Nothing like holding an election with a gun held to your head.

I will say this. The results of the referendum are suspect. Over 90% voted to return to Russia? I cry bullshit on that one. Especially when they announced the results before 50% of the ballots were counted. However, it does appear that there are some citizens there that would rather be part of Russia than the EU. The question is just how many.

There was a protest in Toronto calling for Russia to pull out of Crimea. Signs said Hands off Ukraine. However, Russia invaded Crimea not the Ukraine. The most violent anti Russia protests were held in Kiev not Crimea. To me it would seem that letting Crimea succeed and letting the Ukraine remain free is kind of a peaceful solution to the conflict.

I have a hard time understanding why the EU would ban Crimean citizens from traveling in Europe and freeze their assets. It kinda just looks like sour grapes and theft. They are going to slap travel bans on elected Crimean officials who voted to have a referendum on sovereignty and seize their assets? What right to they have to seize an elected officials assets for passing a law they objected to which simply put the question to a vote of the people?

The biggest protest against the invasion was in Moscow - 50,000 people. That is a huge protest but I'm having a hard time interpreting that. It's hard to know the will of the people in Crimea when you're not actually there. Evidently, Russian in the predominate language spoken in Crimea and they did vote over 70% in favor of Yanukovych in 2010. Logic would imply that 70% would elect to return to Russia as opposed to the EU. If Putin leaves the Ukraine alone and just takes Crimea, that seems like a decent compromise to me. Just saying. 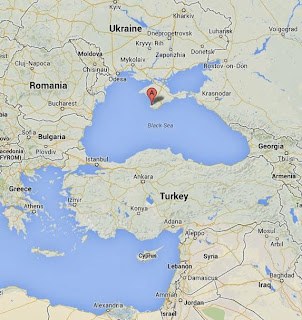 Update: Russia has now seized two Ukrainian naval bases. I was already to go ballistic on this one and call for economic sanctions until I discovered that the naval bases they are referring to are in Crimea not the Ukraine. If Russia seized naval bases on Ukrainian soil that would be an act of war and I would totally support economic sanctions against them. However, it appears that the naval base in question is in the port of Sevastopol which is in Crimea not the Ukraine. In response the Ukraine plans on withdrawing their troops From Russia-Occupied Crimea so it doesn't appear that the sky is ready to fall just yet. If Russian troops seize naval bases off the coast of the Ukraine that would be an entirely different matter.