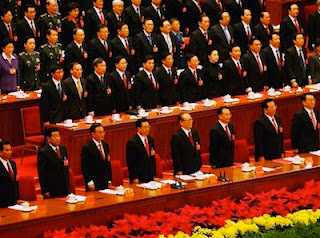 The last post about Putin using a MC to invade the Ukraine has generated some very interesting discussion. I want to be very clear about the difference between Capitalism and Freedom. Many people today think they are on in the same but there is a huge difference. Capitalism is a condition that exists within a free market. The free market represents democracy not the greed of Capitalism. Greed in itself is not good. A Free Republic is good.

I do admire the Americans. They have a very high respect for their flag. They never let it touch the ground. They view it as sacred. They even say a pledge of allegiance to the flag and the Free Republic it represents. The US Constitution guarantees a Republican government.

The Founding Fathers were not referring to Capitalism or George Bush. They were referring to a Free Republic where civil liberty was protected by law not abolished by a manifesto. The movie Gladiator was about the struggle to establish a free republic. So was the Star Wars saga. Eddy Murphy was in a comedy called Distinguished Gentlemen which was about the corruption among the lobbyists in Washington. In Michael Moore's last documentary Capitalism a love story, he illustrated some of the corruption that plagues both parties in the senate. How senators get campaign contributions in the form of insider trading tips on Wall Street like what they threw Martha Stewart in jail for.

It was interesting to hear of the threats and the opposition Michele Moore received for exposing Senator Dodd and the insider trading corruption that plagued the Democrats as well as the Republicans. They told him to cool it. His position was that he would expose corruption on either side on the political fence not just on one side.

So without question the insider trading that is bribing US government officials is staggering but get this. It is nothing compared to the wealth among the politicians in Communist China which promises to oppose the greed of Capitalism. In reality they are far worse offenders.

The Business Insider is reporting that the 70 Richest Members Of China's 'Congress' Are Worth $90 Billion. This is more than the $7.5 billion net worth of all 660 top officials in the three branches of the U.S. government. History repeats itself. Corruption infiltrates both sides of the fence. Communism does not represent social justice and does not oppose the greed of the big banks. They are in reality funded by the big banks only to become much worse offenders. So you say you want a revolution? Just be careful the devil you don’t know isn’t worse than the devil you do know.