Can Mike Farnworth fix the BC Hydro Fraud? 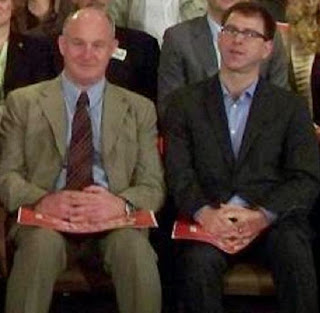 Well this is exciting. After Arian Dix resigned as the leader of the BC NDP Mike Farnwerth is the first to announce his candidacy. Mike Farnworth is a good guy. He is very competent. I was surprised he lost against Adrian Dix but realized Adrian was very competent as well. The stereotype was that Adrian was a little more left wing and Mike was a little more right wing. I do hate stereotypes but that is what people were saying.

My beef with stereotypes is that the right claims the left will tax and spend when that is exactly what the right is doing. However, it is quite possible that Adrian's reputation for being a little more left might have been what scared voters at the last minute when the BC Liberals were nose diving in the polls for all their endless corruption. Mike's reputation for being a little more right just might be enough to appease voters fears about the NDP long enough to get him elected.

I really think we need a balance between the left and the right and we really need to shun extremism. Supporting corporate monopolies does not stimulate the economy nor does it promote a free market. Corporate monopolies simply gouge consumers. Like BC Hydro.

Gordon Campbell's BC Hydro fraud is in my opinion the most pressing issue for this election. That fraud created a massive ballooning debt that the taxpayers are going to have to cover. Cristy Crunch just kept lying her face off with fraudulent budgets claiming they are going to one day balance their budget by extracting a dividend from BC Hydro. That claim was fraud knowing they turned BC Hydro into another Enron and kept deferring it's ballooning defect.

The deficit was created by privatizing part of BC Hydro. The power brokers that sell power to BC Hydro at an inflated rate. That was a criminal act. A private company is mandated to make a profit. It then sells power to the public company at above market rates which in turn gouges taxpayers and consumers. The privatization of the power brokers that are ripping off BC Hydro and all of British Columbia must be reversed. 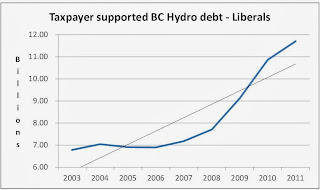 Mike Farnsworth cares about crime in the community. The BC Liberals do not. Don't get me wrong. I don't support everything the NDP stand for. I rather see a BC Conservative party rise up that is free and independent of Stephen Harper's hypocrisy. Something like Ron Paul without the legalization of all drugs. John Cummins had the right idea but that idiot troll from Gordon Campbell's caucus planted the seeds of dissension and killed the party. Mike Farnworth is a good balance for British Columbia. God save the people from the BC Liberals endless corruption.