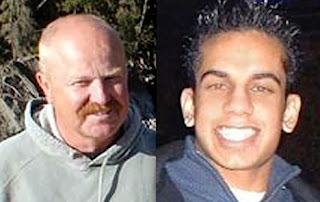 Kim Bolan is reporting that Person Y is testifying at the Surrey Six trial. This is big news. We all know who Person Y is but we can't say his name because it's under publication ban. All I'll say is that Person X and Person Y got switched around. Kim Bolan knows who it is. That's why she refers to him as the star witness.

Nobody is calling him a rat because the people involved in the Surrey Six are the rats. Executing two innocent bystanders. That was messed up. That is why this web site was created. Executing four drug dealers because they wouldn't pay the tax Jamie Bacon tried to collect from them for *somone* else. That was messed up. Totally. You can put a cap in my ass for saying that. It's still true. Larry Amero was friends with Jonathon Bacon all along. He just came out of the closet in Kelowna when he was shot with Jonathon Bacon.

It's not brain surgery. If the UN wasn't supplying the Bacon brothers someone else had to be. After the Surrey Six the Red Scorpions started working for the Hells Angels just like the Independent Soldiers did after they killed off all the old leadership who weren't affiliated with the Hells Angels in that group as well.

Selling drugs in cubs is really no one else's business. Giving crack to the homeless for free then beating the life out of them for payment afterwards is really messed up. That's me beef.