Shootings in Surrey and Langley 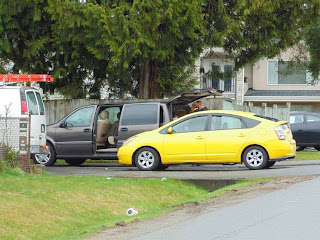 The Vancouver Sun is reporting that there was a targeted shooting in Surrey this morning at 6:30 AM. No it wasn't my house. Witnesses report seeing a brown van as well as a black pickup leaving the scene after the shooting. One of these vehicles is believed to have a broken window. News 1130 is reporting that neighbours reported hearing a loud argument and then hearing a number of shots. When officers arrived they found a 30-year-old man who had been shot. He was taken to hospital and is in stable condition.

Shootings in Langley as well. Scan BC is reporting that #Langley #RCMP are on scene with 2 males shot in a house in Walnut Grove. Suspect outstanding with a weapon, area on lockdown. K9 searching. Global is reporting that two people have been injured and another has been arrested after an incident at a Langley home Sunday afternoon, RCMP confirm.

Update: Evidently the Langley shooting was at a licensed medicinal grow op. The Vancouver Province is reporting that two people have been charged after the armed robbery - Christopher Carl Agin, 29, and Rosemary Souriyavong, 23. Kim Bolan is reporting that they are from Surrey.

Posted by Dennis Watson at 2:51 PM