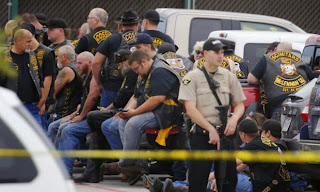 Seemingly it was between Bandidos and Cossacks. Law enforcement officials said the gun battle was primarily between the Bandidos and Cossacks gangs, a continuation of a long-running feud between the two groups, though members of the Scimitars and two other gangs were also involved. Texas police say 192 people are to face organized crime charges after the Waco bike-gang shooting that left nine people dead and 18 others injured.

Update: Mixed reports are coming in on this. It has been claimed that it was the police that fired all the shots which resulted in all the fatalities. That is worth finding out.

NEW Update: Breitbart.com is confirming those rumours by quoting a different account of what happened by the Aging Rebel. The Aging Rebel claims "When the restaurant refused to ban the Confederation of Clubs, police stationed at least 22 cops including ten Swat officers from the Waco P.D. and the Texas Department of Public Safety in the parking lot outside the restaurant. They did not station either uniformed or plain clothes officers in the restaurant."

"The shove in the bathroom became a scuffle in the restaurant. When about 30 Bandidos, Cossacks, Scimitars and other bikers spilled into the parking between the Twin peaks and the Don Carlos Mexican restaurant next door, the police were waiting for them. The scuffle became a knife fight and several men were stabbed. When one of the combatants produced a gun the Swat team opened fire with automatic weapons. Multiple sources have told The Aging Rebel that all of the dead were killed by police."

OK so the bikers claim everyone shot dead was shot by the police. Not necessarily a reliable source but at this point I'd say it's one step more reliable then the police on the scene which changes the events completely. Yes a fight broke out and yes someone pulled a gun and was going to shoot someone. So why not just shoot the guy who pulled the gun? Perhaps they also shot guys who pulled knives and were stabbing people.

We're never going to find out what really happened. The bikers who would have been shot by the biker who pulled the gun are still going to complain about the police saving their life. Just as the ones who were going to get stabbed next by the bikers with the knives are going to complain the police saved their life as well. The underlining question is, did SWAT over react and just use it as an excuse to exterminate bikers? We know a fight broke out and we know there is past history with those clubs. The Bandidos trying to tax the Cossacks. However we also know there is past history in Waco Texas with the Branch Dividians.