This one's kind of baffling. There was a big song and dance patting everyone on the back for breaking up a heroin ring that was bringing heroin into Canada from Afghanistan. 37 kilos of heroin were seized. That is a fair amount and a job well done. Yet it's all so conflicted.

After all this was heroin coming in from Afghanistan. Insp. Cal Chrustie, a spokesman for the RCMP’s Federal Serious and Organized Crime unit (FSOC), told reporters “The feedback we’ve received recently is we haven’t seen a number of shipments coming into Canada of Afghan heroin recently.” That's the problem right there. Afghanistan supplies 92 per cent of the world’s opium.

In 2001 the Taliban had brought opium production to a grinding halt. After the allied invasion Afghanistan once again became the world's largest producers of opium. So if Afghanistan is the largest producers of opium in the world, why aren't we seeing many shipments coming into Canada? Are we not looking for them? Would that interfere with our allies who are guarding, protecting and promoting the opium trade in Afghanistan? Just like in Vietnam. 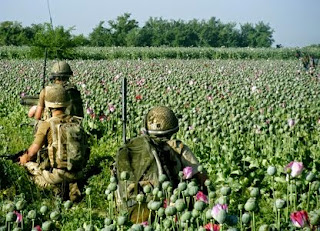 US Soldiers are protecting the opium crops. That is the biggest con of the Brave New World. They claim that if we don't do it the Taliban will. Yet that is a lie because the Taliban were the ones that brought opium production to a grinding halt. We are the ones that reversed that trend.

This drug ring was sure taking a round about route to get to Canada. It wasn't coming from China like all the huge shipments. The Vancouver Province reported that "Shipments originating in Afghanistan traveled primarily by air - either on people’s bodies or in their luggage - through Johannesburg and Dar es Salaam, then to Brussels and on to Canada. The shipments were then distributed to Montreal, Toronto, Calgary and Vancouver." Not like the half ton shipments coming here from China. Sounds more like a sting operation then the disruption of a real network. 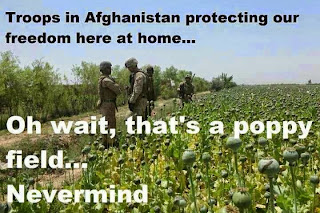