Well this comes as no surprise. The Vancouver Province is reporting that so many residents complained to City Hall about the new Devil's Army clubhouse in their neighborhood near a school that City Hall applied to the courts for an injunction to get rid of it for bylaw infractions.

That huge gay pride parade and house warming the Hells Angles had for them sure wasn't very bright. How is that not going to piss off the whole neighborhood? It's like the saying pride cometh before the fall. Their pride has made them stupid. They're supposed to deny that the Devil's Rejects work for them. Instead they all show up in mass for a Village People concert crammed like sardines in the back yard. Right after Jay Hall's murder and the Brandy Sarionder murder / suicide after they forced her out of the business. So much for keeping a low profile.

The Vancouver Province is still referring to it as a Hells Angels clubhouse. Kind of hard for them to dispute that after their Gay Pride parade there. The Hells Angels in BC used to be a lot smarter. They must be using too much of their own product. They are getting reckless and stupid.

Update: The Times Colonist is reporting that the owner of the property is trying to sell it while Langford Mayor Stew Young said the offer to sell does not affect legal action the City of Langford has taken against the owner, Pacific Coast Land Co. “We can’t go after anyone but the actual owner,” Young said. Langford’s B.C. Supreme Court claim, filed May 1, calls on the owner and its tenants to stop using the space as a clubhouse, citing zoning and bylaw infringements. Pacific Coast Land’s 2014 annual report lists Harald Skadberg as its president and Jan Egil Gulbrandsen as its secretary-treasurer.

Earlier the Vancouver Province reported that the property was owned by a prominent Christian businessman. Corporate records say officers of Pacific Coast Land Company Inc. include prominent Victoria businessman Jan Egil Gulbrandsen, a Norwegian investor who co-founded a large retail franchise. Gulbrandsen is also director of Grace Camp Ministries, a summer Bible camp in Victoria. His online bio says: “Jan Egil is a businessman whose life has been impacted by the reality of God’s grace. He enjoys freedom in Christ and is thrilled to see the true gospel revealed to others.”

Somewhat hypocritical for him to support a Hells Angels puppet club called the Devil's army who is boldly opposing everything Christianity stands for. Sounds like he belongs to the same church Tony Terezakis belongs to. It's called the church of the devil. By their fruits ye shall know them. Maybe they'll change the name of the clubhouse to Piggy's Palace. 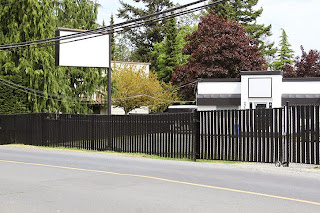 CFAX is reporting that the 41 signs have come down but that doesn't mean anything else has changed. The Goldtream Gazette is confirming the 41 sign has been taken down and that the city is awaiting a response from the property owner regarding the court application.