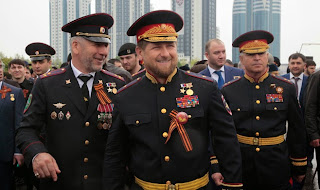 The Moscow Times is reporting that Chechen leader Ramzan Kadyrov announced over the weekend that he had become the honorary leader of a new regional branch of the Night Wolves, a group of political bikers in Russia.

Speaking of Chechnya, Russian intelligence was caught planting a bomb in Chechnya and blamed it on terrorist just like the Americans. September 22, 1999, locals in the regional town of Ryazan saw three men emerging from the cellars of a block of flats who later turned out to be FSB officers. When local police checked the cellars they found sacks of high explosive wired up to a detonator. The FSB later attempted to explain away the incident by claiming that the entire operation was a training exercise. Kinda makes ya wonder about the wave of bombings that put Putin into power.

Speaking of the Americans, Graham Fuller was involved with Iran contra. The address for the Congress of Chechen International Organizations just happened to be the home address of Graham E. Fuller, formerly Vice Chairman of the Reagan-era CIA's National Intelligence Council.