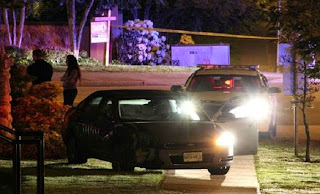 The Surrey Leader is reporting that there was another drive by shooting in Surrey this morning that resulted in a car crash. "Surrey RCMP say they received several 911 calls reporting shots being fired about about 2:25 a.m. in the neighbourhood near 68 Avenue between 121 and 124 Streets. When police arrived, a dark-coloured Chevrolet sedan had crashed into a rock post. According to Mounties, witnesses reported seeing a vehicle stopped at 124 Street and 68 Avenue, when a gold-coloured car pulled up beside it and fired shots toward it."

No doubt brain surgeon Bill Fordy will post a picture of the person being shot at again because he isn't cooperating with police. That'll solve the problem. Not. The only thing that will solve the problem is if Bill Fordy transfers out of Surrey and the police start arresting the crack dealers who are dealing in public but they refuse to arrest. It's that simple. Only in New York you say? Pity.

Just for the record, there is not a snowball's chance in Hell the Somalians in Calgary are taking on the Hells Angels in Surrey. Not a chance. As I said before the Somalian population in Surrey is tiny compared to the Asian, Caucasian and South Asian community. Bill Fordy has no idea of what he's talking about. He's just repeating a press release the new spin doctor gave him to read.

In Calgary it was the FOB and the FK that were fighting each other. The Hells Angels supplied the FOB through the Independent Soldiers while the UN supplied the FK. All these local shooting started when Skeeter's brother was found dead in Surrey. The prime suspect in that murder was indeed a drug dealer from Calgary. Only he wasn't Somalian and he worked for the FOB who were Hells Angels associates.

In 2012 when the brown drug dealers were being shot in Surrey it was the Hells Angels. After Larry Amero and Jonathon Bacon were shot in Kelowna the Hells Angels had the Duhre Dhak group all shot up. However they still exist. The Hells Angels still want them eliminated and will use whatever group it takes to get that job done to put them out of business. Just like Brandy.

Obviously the Hells Angels aren't directly involved because if they were there would be dead bodies not just drive by shootings. Like how they hired Mickie (Phil) Smith to kill Paul Percy Soluk at a crack house in Surrey back in 1999. The Hells Angels have been involved in the Surrey drug trade since the Surrey House of Horrors. Yet it's clear the Hells Angels are indirectly involved because they have to be supplying one of the groups just like they were indirectly responsible for all the violence in Calgary between the FOB and the FK because they were supplying the FOB.

Update: The Peace Arch News is reporting that three people were taken to the hospital after a shooting in Whalley 5:30 AM Friday morning.

Second update: The Vancouver Sun is reporting that Surrey RCMP is currently investigating a "suspicious death” at a home at 94th Ave and 140th St. Police were called out to the home Sunday morning, discovering the body of a female.