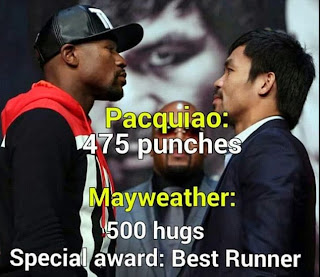 Well it's all over but the tears. Mayweather won a unanimous decision against Pacquiao. Yet the jokes are going viral. One caption reads: "Silly Mayweather. You're supposed to hit your opponent and hug your wife not hit your wife and hug your opponent." A cutting reference to his domestic abuse charge and how every time Pacquiao got close enough to hit Mayweather, Mayweather pulled him into a clinch so the reff would separate them. Many claim the rest of the fight was Mayweather running away from Pacquiao.

I understand they are replaying the fight Saturday May 9th at 9:00 PM on HBO and Showtime.