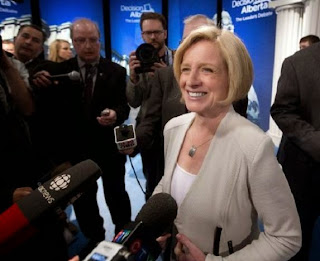 CBC is reporting that "It's a massive shock that turns Canadian politics on its head: the NDP has won a majority government in Alberta. NDP Leader Rachel Notley will be Alberta's next premier. Her campaign was touted as having shades of Jack Layton. The Wildrose Party will be the province's Official Opposition."

The NDP won 53 ridings. Wildrose took 21 seats, while the PCs took 10. There was a tie in one Calgary riding — Calgary-Glenmore — between the PCs and NDP. A recount will take place in the next few days. The Liberals and the Alberta Party each claimed one seat.

Update: That was shocking. For our American friends, Alberta has been a Republican State since forever and it just elected a Democrat for governor. That's the simplified version. It's a bit more complicated than that because we don't have the two party system in Canada. We have the left, the right and the centre. Only the right isn't right, the left isn't left and the centre isn't centre. God only knows where the green party fits in.

I spoke with a coworker and said you're from Alberta. What the hell happened? He just laughed and said BC does that all the time. They get pissed off with one party then vote them out and vote someone else in entirely. Then they get pissed off with them and vote someone else in again. Yeah but that's BC I said. We've always been crazy. Alberta has always been stable. He said yeah but a lot of people from BC have moved out to Alberta. Perhaps.

The first stereotype I want to address is the claim that the NDP will tax and spend. Well Stephen Harper is doing a fine job of that himself. First it was the bank bailout that the banks didn't need. Then it was the conflict of interest jets that didn't work in the arctic. Then is was an obscene amount of tax dollars to spy on Canadians without a warrant and of course all this money spent on advertizing telling us that his taxing and spending is good for us.

Nobody likes tax. Low taxes are good for business. The fact that Alberta has no sales tax is a good thing. You don't want to screw that up. You don't want to hit the oil industry with more corporate tax right now either. When people are prospering then they can chip in but right now that industry doesn't need more tax. However, it is my opinion that the whole economic struggle in Alberta right now is the result of fraud. Oil prices have dropped so we saw a couple weeks of cheap gas at the pumps then it's right back up to ripping us off at the pump.

The real problem is the fact that the government helped Enbridge get a monopoly on the market then sold it to Communist China so they get all the profit and can charge whatever they want and screw over both the consumers at the pump and the workers in the field whenever they want. That is the root of the problem.

CBC Rachel Notley: a premier 50 years in the making

Posted by Dennis Watson at 4:59 AM