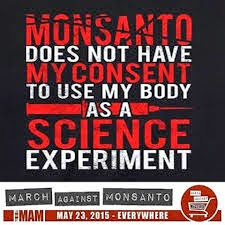 CTV is reporting that "Protesters gathered in cities across the globe Saturday to rally against the American biotechnology giant Monsanto. The third-annual March Against Monsanto was held in several major Canadian cities, including Toronto, Winnipeg, Calgary and Vancouver. In total, organizers said that events were being held in 428 cities in 38 countries."

The protest is about the abundance of Genetically Modified organisms which inject pesticides into food and modifies the seeds. It is a serious concern because it is wiping out bees which means cross pollination becomes obsolete. In Europe where GMO has been banned the bee population is starting to return. It's another example of corporate greed where large corporations get a monopoly on a market and wipe out all opposition. I first found out about GMO at a Stephen Harper protest in Kelowna. Consequently there was a large turnout in the Kelowna protest today.

Castanet is reporting that "organizers believe Monsanto is destroying farmer’s lives across the globe and making headway into owning the seeds that farmers are forced to use – which would be GMO." Conservatives are supposed to support small business and the free market but that is exactly the opposite of what Stephen Harper is doing. Instead he is helping large corporations destroy the free market by killing small business so they can gouge consumers as long as they pay a kickback to the politicians that enabled them.

We need to enforce GMO labeling by law. If someone wants to sell GMO produce it needs to be labeled accordingly. Failure to do that is fraud.