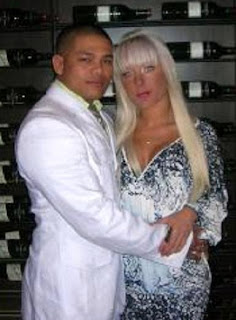 Speaking of domestic violence and the Langford drug trade, Jefferson Delalcazar is at it again. CSO is reporting that on May 3rd 2015 he was once again charged with assault, uttering threats and this time unlawful confinement as well. It's a K file which means domestic violence.

May 2011 he plead guilty to assaulting his old girlfriend and criminally harassing her. Seemingly it wasn't his ex this time so it must be his new girlfriend that was arrested with him two weeks ago.

Clearly the Hells Angels gay pride parade at the Devil Army's clubhouse in Langford had nothing to do with riding motorcycles and everything to do with enforcing a monopoly in the drug trade. The Delalcazars have obviously done business with the Hells Angels in the past like the UN has but the word is they hate HAs. Like I said before one is no better than the other but I will say this. The Latino brothers are warriors not puppets. Rainbow Ricky has many slaves but few warriors.

It's going to take a lot more than a posse of Village People for the Delalcazars to kiss Rainbow Ricky's ass. That's just not going to happen. Perhaps Rainbow Ricky could explain to the Delalcazars all about how they sodomized "another" butler when he was with the Satan's Angels before they patched over to become the Vancouver Hells Angels. I devoted a whole chapter to that in my eBook after I finally got a copy of the book The Devil's Butler which printed all the police wiretaps confirming the deranged deed. That was messed up. The Latino brothers may have anger issues but they aren't into that pig farm depravity. Not like the Hells Angels are.