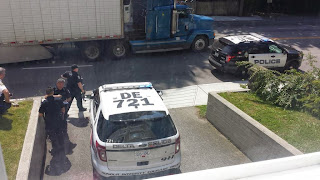 News 1130 is reporting that there is a police incident at 1st & Royal Ave New Westminster. They also claim that it extends across New West, south Burnaby and into South Van. The Vancouver Sun reported that it was likely about "Police searching for an armed and dangerous man and woman following an attempted shooting and car chase through New Westminster, Burnaby and Vancouver."

Scan BC reported that #PortCoquitlam #RCMP are on scene with a person who has been shot in the head out front of a residence at 1100 Clerihue Road - unconfirmed. Global is reporting there was a shooting in Burnaby Tuesday night.

News 1130 is reporting that IHIT has been called in after police found a body in Richmond Tuesday.