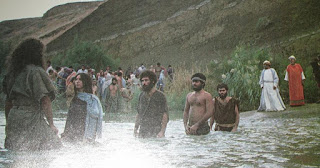 As the holiday hype dissipates, I'd like to reflect on some French traditions. Before I do that, I'd like to make reference to John the Baptist or as they say in Quebec Jean Baptiste. June 24th is Saint-Jean-Baptiste Day, a National holiday in Quebec. So just who was Jean Baptiste?

The Christian calendar seems to revolve around Christmas and Easter. For many it's the only two times a year they actually go to church. The birth of Christ and the crucifixion and resurrection of Christ. Santa and the Easter Bunny have blended in making it a fun holiday for everyone even if they're not Christian. Yet somewhere between those two events was a man named John the Baptist. Here's a guy that prepared the way for Christ's mission.

History will tell us that Christ came over 2,000 years ago and taught many things before he was finally rejected and crucified. Josephus a non Christian Jewish historian will confirm that. Whether or not Christ actually rose from the dead, well that is indeed debatable. Yet the fact that he was here and taught many things about living a good life is not debatable. It is a historical fact.

As with Jean Baptiste. That is part of history. He was a missionary of sorts. Some might say he was an odd fellow, who lived in the wilderness, wore sackcloth and ate locus with wild honey. I used to work on a Kibbutz in Israel. I've seen the size of their grasshoppers. They're pretty big. Wouldn't take many to make a meal. Not something I'd want to try myself.

When I was in New York the brothers used to say yo bro you're on a mission which meant you're crazy. I'd always respond with yo bro I'm going on a mission. That was back when the Eurythmics came out with that song Don't mess with a Missionary Man.

Elijah was a missionary man. Some kids were making fun of him calling him baldy so he cursed them out. After that a couple of bears came out of the wilderness and ate the kids that were mocking him. They say karma's a b*tch so it is.

So back to JB. John the Baptist baptized people in the river Jordan. He even baptized Christ. Yet things didn't end will for John. He upset King Herod who put John the Baptist in jail. He was then beheaded and his severed heard was served on a silver platter. Josephus also confirmed Herod killed John the Baptist. That is a part of history. Yet me thinks things ended worse for Herod since even Ozzy Osbourne knows life does not end at death. We are free to make choices but we must one day face the consequence of our choices good or bad. That is natural justice. Peace. 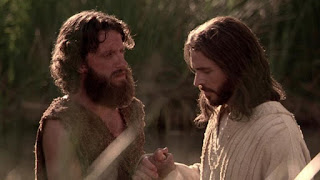