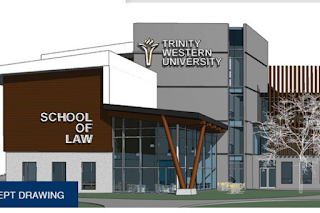 CTV is reporting that "An evangelical Christian university under fire across the country for forbidding sexual intimacy outside of heterosexual marriage has secured a decisive legal victory in its effort to open a law school in British Columbia. B.C. Supreme Court Chief Justice Christopher Hinkson ruled in favour of Trinity Western University, reversing a B.C. Law Society decision to deny accreditation for graduates of its proposed law school who want to practise in the province." The Nova Scotia law society were ordered to pay damages for their breach.

The Chief Justice wrote that “the evidence in this case and the relevant precedents conclusively establish that the decision does infringe the petitioners’ Charter right to freedom of religion,” which the Law Society failed to properly consider. No kidding. The BCTF tried to the same thing and were unsuccessful. The Law Society knew their decision was illegal but they proceeded unilaterally nonetheless. There are numerous Catholic Universities and law schools in the United States. They are all accredited. If you don't agree with their standards go somewhere else but don't rob their of their civil liberties. Adopting a single state religion is as bad as banning religion altogether. Both roads lead to the same place.