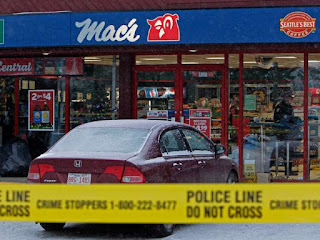 The National Post is reporting that two convenience store clerks at a Macs in Edmonton were shot dead during a robbery 3:30 AM Friday. Three male suspects are in custody, ages 26, 24 and 13. All have records and all are prohibited from possessing firearms.

Update: The Edmonton Journal is reporting that the two clerks who were shot dead were shot and two different Macs stores. Bizarre. Colton Steinhauer, 27, and Laylin Delorme, 24 as well as a 13 year old boy have each been charged with two counts of first-degree murder.

Update: The National Post is reporting that "The Honda Element that was used in the killings of two Edmonton Mac’s employees was stolen from a Sherwood Park home five days earlier, in a violent home invasion during which a woman says she was bound, choked, repeatedly hit and threatened with a sledgehammer." 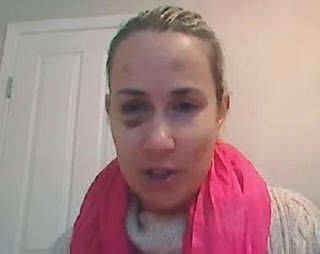 Posted by Dennis Watson at 8:31 AM