The Parable of the good Muslim 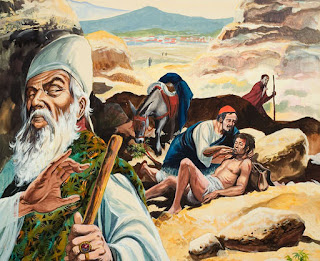 There is a lot of hate and insanity being spewed around the Syrian refuges and I just want to set the record straight: I don't support it. I don't support the hate and propaganda against Muslims any more than I do against Jews, Catholics or Protestants. A free republic supports the freedom of religion. That's all there is to it. Adapting a single state religion is as bad as abolishing religion altogether. Both roads lead to the same place.

Christ taught in parables. One of them was called the parable of the good Samaritan. I think it's really important to put it in context of the times so we can correctly apply it to our day. Samaritans at the time were hated. They were a different race and religion. Christ picked someone from a class everyone hated to show the world what his religion was really about. It's about serving others and treating others the way you want to be treated. If Christ was here today he could just as easily and more likely call it the parable of the good Muslim. The message is the same.

Now we have people hating on the Syrian refuges. Aside from being unChristian it is unCanadian. It's Christmas for God's sake. They are women and children fleeing a war torn country. We should be bending over backwards showing them the Christmas spirit. We have been discussing the censorship of comments on blogs and newspaper articles. One blog reader said I need to clearly define my parameters so people don't think I just censor things I don't like. I jokingly responded but I do. This is not a Hells Angels support group.

If people want to ramble on and on about how the Hells Angels are a nice bunch of guys that don't sell drugs or pimp crack hoes, they are free to do that in one of the many main stream support sites on the Internet. Just not here. My site is for the alternate view. I do believe in free speech. People can say whatever they want all over the Internet. Just not on my blog on my dime. Likewise if people want to spew neo-Nazi hate I'm not going to approve those comments. I support a free republic and the freedom of religion. That is what this blog is all about. I support the Hamilton model. That is the type of society I want to live in.

This is the link to the video about the Hamilton model.