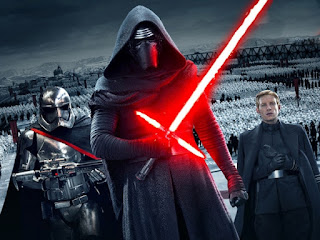 OK so I've seen the new Star Wars movie and I'm not going to ruin it for those who haven't. I am going to comment on two aspects of the movie and apply it to our day. One is when good people go bad and the other is the struggle to obtain and maintain a free republic as opposed to a galactic empire so to speak. Both revolve around the struggle between good and evil.

This episode is basically a remake of the first episode only it's the next generation showing how history tends to repeat itself. Once again we see a good guy go bad and once again we see the empire rise up to take over the free republic. Only this time a storm trooper sees the light and leaves the empire. Somehow he figured out that killing innocent people was bad. It's hard to conceive how more couldn't figure that out but then again, no one wants to be a "traitor." If you are killing innocent people you are a traitor. You're not a traitor if you object to it.

So Luke trained a Jedi who turned to the dark side just like how Obi Wan did.The rise of the empire appears to be the same old drive for power and greed. One group wants to have power over another group so they try to over throw the free republic and establish a galactic empire where civil liberty does not exist. In the original Star wars saga a false flag attack was used to con the senate into giving up civil liberty. This time there was no false flag. A group just rose up and said here we are. We're talking over. The boldness of Bilderberg so to speak.

So the new saga has begun. Will the free republic be saved or crushed? Will the bad guy become good in the end? Hard to say. He starts off pretty bad yet already his weakness has been revealed. Time will tell. It always does. Yet in the struggle between good and evil it's hard to conceive how some can glorify evil. Oppression, betrayal, greed, a jedi seeks none of these things.