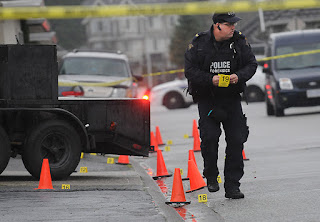 The Surrey Leader is confirming a scan BC report of shots fired at 127th St and 67B Ave. Schools were locked down but are now open. The Surrey Leader is reporting that one resident counted 12 to 15 bullet holes in the house. The shooting took place at about 11:40 AM today.

Kevin Diakiw from the The Surrey Leader is reporting that there was another drive by shooting in Newton early Tuesday morning. "Surrey RCMP were called to a Newton home at about 2:30 a.m. Tuesday after reports of shots fired at a home, near 132 Street and 78 Avenue. When police arrived, they found bullet holes in windows, broken glass and a number of shell casings. It's the second shooting in 15 hours in Newton, both drive by shootings of homes in the area.