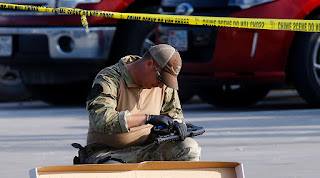 Wacotrib.com is reporting that "Four of the nine people killed in a melee between rival biker gangs outside a Twin Peaks restaurant were struck by the same caliber of rifle fired by Waco police... Two of the four dead had wounds from only that kind of rifle; the other two were shot by other kinds of guns as well. The ballistics reports show that the rest of the people killed were shot by a variety of other guns." So the results are in.

The Bikers were claiming they were innocent victims of a police genocide. However, the evidence paints a different picture. The Bandidos and the Cossacks had a history of violence. The Bandidos are rivals of the Hells Angels and claim ownership of Texas. The Cossacks are a puppets club of the Hells Angels. A fight broke out, someone was stabbed. The fight went into the parking lot where guns came out and people were shot. The police opened fire. According to the New York Times, eight of the nine victims were members of the Cossacks. One was with the Bandidos. So it's still about the Hells Angels attempt to take over the drug trade. 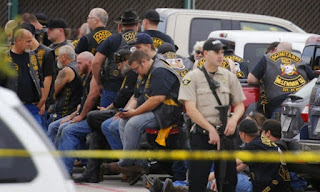