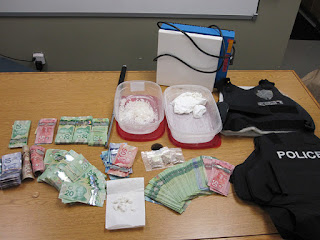 The Chilliwack Progress is reporting that: "The RCMP had a busy Tuesday rounding up suspects and seizing firearms, property and illegal drugs as part of an extensive police investigation. Police from the Chilliwack RCMP Crime Reduction Unit supported by officers of the Crime Prevention Office, Serious Crime Unit, Traffic Services, General Duty and Agassiz General Investigation Section executed five separate Controlled Drug and Substance Act search warrants in Chilliwack. The warrants contained evidence gathered during a four month investigation into a ‘Dial a Dope’ organization operating from two locations within the city."

"Five people were arrested and police seized a large quantity of cocaine, crack cocaine, methamphetamine, chemicals used in the production of methamphetamine, heroin, material believed by police to be for packaging of product, several firearms, thousands of dollars in cash, luxury cars and Kevlar vests."

Police say they seized a large quantity of cocaine, crack and crystal meth but no amount is mentioned and there sure isn't very much on display in the picture. Nevertheless, the logic is sound. Going after crack and crystal meth will prevent violent crime. This is crime prevention. However, one has to wonder, if the Chilliwack RCMP is going to all that effort to investigate and arrest crack and crystal meth dealers in dial a dope operations, why on earth is the Surrey RCMP letting them sell crack in public outside the Front Room in Whalley? Something doesn't sound right and it begins with Bill Fordy. He's too busy doing other things then to worry about preventing violent crime. Perhaps that's why he's in that position.