CBC is reporting that "a Federal Court judge has struck down federal regulations restricting the rights of medical marijuana patients to grow their own cannabis and given the Liberal government six months to come up with new rules." I suppose this is both good and bad.

It's good because forcing patients to buy pot from expensive corporate giants or from organized crime is bad. Yet so is misinterpreting the charter of rights. "Judge Michael Phelan ruled Wednesday in Vancouver that the Marijuana for Medical Purposes Regulations were an infringement on charter rights and declared they have no force and effect."

"The judge was careful to point out that the ruling does not change other laws that make it illegal for Canadians to use marijuana recreationally." Which as we know is going to change with he election of Justin Trudeau on his campaign promise to legalize it which I did not support.

A few concerns appear to be on the table. One is organized crime, the other is corporate monopolies which in this case coincide one with the other since the Hells Angels use violence to obtain a monopoly on the drug trade.

One of the first arguments those for the legalization of marijuana raise is that legalizing pot will combat organized crime and take it out of the hands of the Hells Angels. Not necessarily I argued. Exotic dancing is legal and that didn't stop the Hells Angels from using violence to take over the Exotic Dancing industry in BC. Just ask Brandy Sarionder. Oh right, she's dead.

Likewise in Amsterdam prostitution is legal and that didn't stop the Hells Angels for using extortion to buy the Yip Yam brothel for far less than what it was worth. For all practical purposes legalizing marijuana will simple make the Hells Angels unstoppable. It will prevent the police from arresting them at all unless someone has the courage to step forward when they are being threatened and extorted which as we have seen in the exotic dance industry, is highly unlikely.

However, growing it at home might. If everyone is allowed to grow it, then it would be unrealistic for the Hells Angels to threaten and extort everyone like Uncle Joe's did in Salmon Arm.

The other concern is fostering pharmaceutical monopolies on the market which would drive prices up. The NDP are always big on generic medication. Simply because whenever someone finds a treatment for a disease, the pharmaceutical companies try to patent the drug so they can charge the moon for it and make lots of money. Ripping people off with terminal illnesses is pretty dirty. Growing Pot at home for personal use only would help reduces costs. 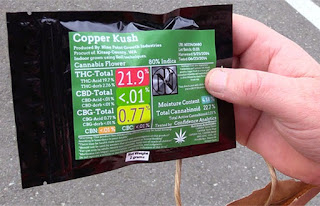 "CBD does not get you high" - SAM: Smart Aproach to Marijuana