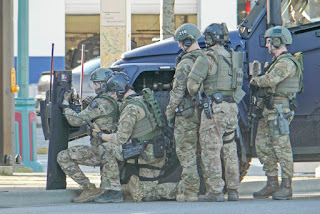 The Langley Times is reporting that "Heavily-armed police officers raided a Langley City residence on Fraser Highway near 201 Street Tuesday afternoon. Members of the Emergency Response Team arrived around 4 p.m. in an armored truck. They blocked off the street and used a loudspeaker to tell occupants of a first-floor suite that the ERT was there to serve a search warrant, that the people inside were under arrest and for them to exit the premises. After about 20 minutes, the ERT stood down, apparently because no one was home. Members of the Langley RCMP remained at the scene. One source told The Times that the address appears to be the same location that was raided previously by police as part of a mail theft investigation."

Mail theft? When people see this kind of thing the first concern that comes to mind is police state.

Update: "Police said the ERT became involved because there was a tip that there could be weapons inside the suite. However, none were found."