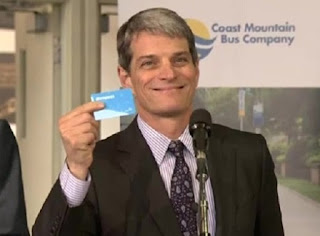 Kevin Desmond has been named the new CEO of Translink to become the public face that will help heal the bruised brand Translink has incurred. I'm not worried about the fact that he is an American. This doesn't represent foreign ownership like Harper selling our oil rights to Communist China. He has good reviews in Seattle and has experience in New York City.

The Globe and Mail reported that "Mr. Desmond conceded it would be a mistake to come to his new job with a fixed strategy. Instead, he said he will listen to customers, workers, his board, mayors and the province to decide on directions for TransLink." Well that's a good step if sincere. When Moya Greene came to Canada Post she did the exact opposite.

After crashing bombardier's stock and derailing CN she came to Canada Post with zero experience in the field claiming to know everything and that all her existing managers who had been at the job for years were stupid. She started recklessly making ridiculous changes anyone in the field could tell her wouldn't work. So yes, Kevin Desmond is indeed a breath of fresh air.

So if you really want to listen, hear this: Translink is over budget over a billion dollars a year. That's how much they consume in a regional gas tax above and beyond all the other federal and provincial gas taxes. That's why the public voted no to burning more tax dollars in a referendum on raising sales tax to help Translink waste taxes.

This isn't New York. New York City and London England have the best subway systems in the world. They are built and paid for and are very efficient. You don't need a car in those cities because the subways are much more efficient. Not here. Not at all. This is more like LA on a smaller scale. People have cars just like they do in Seattle. Tax payers are getting upset about having to keep bailing out a failing system they don't even use.

They used to have a bus that went from Guildford Mall in Surrey to the PNE in Vancouver. It went along the freeway and would take about 15 minutes. After they built Skytrain they refused to run that efficient route and made the public bus, skytrain and bus to the same destination taking a ridiculous amount more time. When they reintroduced an express bus from Langley to Vancouver along the freeway they refused to let it stop at Guildford. That is bad business.

The Mayors' tax and spend glutins council keeps rewarding political contributors by giving them contracts to over budget Skytrain expansions that we don't need. Let the existing system pay for itself before you keep going further in debt expanding it and stop giving the contract to corrupt firms banned for money laundering. That is irresponsible.

The Compass card isn't so bad. I was hesitant at first but they offer the same discount on it as with Faresavers so I'm happy with it. Having to scan out when you leave the bus is a bit big brother but installing turnstiles in the Skytrain is a must. How much money would New York city lose every day if they got rid of turnstiles and let everyone ride on the honour system?

Executive extravagance, excessive skytrain expansion to corrupt construction companies and giving everyone free rides on the bus and Skytrain are the main sources of lost revenue. Cheers.