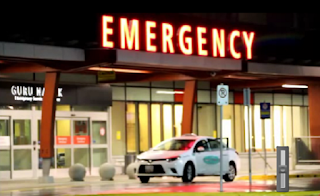 The Surrey Leader is reporting that "On Feb. 18 at approximately 5 a.m., Surrey RCMP responded to reports of gunshots being fired in the area of 143 Street and 109 Avenue. Numerous 911 calls had been received as well as a call from a male advising he had been shot. The victim, who had been riding in the taxi, attended hospital on his own and Surrey RCMP met him there and confirmed he had suffered a minor wound to the leg."

"Further investigation revealed that several gunshots had been fired at the cab, shattering the window and grazing the victim. The man was treated for his injuries and released from hospital. The taxi driver was not injured. The investigation is still in its early stages, but RCMP say this incident is likely targeted. Surrey RCMP's Major Crime Unit has conduct of the investigation."