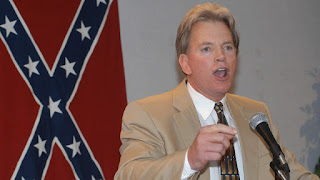 David Duke, a white nationalist and former Klu Klux Klan grand wizard, said voting for anyone besides Donald Trump “is really treason to your heritage.” So CNN asked Trump about the endorsement and asked him three times to disavow the support his campaign is getting from white supremacist groups. Huffington Post posted his response. Now he's claiming he had a faulty earpiece and couldn't hear what group he was being asked about. Yet he repeated the term white supremacists so he did hear that part.

Mashable.com is reporting that "While Trump's focus on immigration policy has indeed proved popular among Republican voters, many of his remarks - such as calling Mexican immigrants drug runners, criminals and rapists - have drawn fierce criticism from rival candidates within his own party and liberals alike." His position on immigration makes the endorsement from white supremacists not very surprising.

I have two points to make in this circus side show. First it is astounding that the KKK still exists in today's society. We are supposed to be getting more educated and more civilized as time progresses. Instead we are de evolving into neanderthals and hillbillies. F*ck the South. Who would fight a war over the right to have slaves? Those are not the kind of people civilized human beings would want to be an a union with.

Donald Trump says he likes Canada and wouldn't build a wall between the US and Canada just between the US and Mexico yet he already has. Donald Trump has totally alienated Canada by making such insanely racist comments about all Latinos. Inasmuch as ye have done it unto one of the least of these my brethren, ye have done it unto me. The shocking and disappointing thing is how far the raging lunatic has gone in this campaign. If he becomes president there is no way in hell I'm crossing the 49th parallel. People talk about enemies of the Constitution both foreign and domestic. Donald Trump is a domestic enemy of the Constitution. Yet he isn't the only one.

I had a friend who was unlawfully detained at the truck border crossing last year. When I went there the following day to lodge a complaint they told me my friend was not entitled to a lawyer and that they were not governed by Constitutional law at the border they were governed by immigration law. I kid you not. They tore up the Constitutional right in front of me and danced on it's ashes. They most certainly were not oath keepers. If they claim that Canadians are not protected by the Canadian charter of rights or the US Constitution while on American soil and can be arrested without charge, unlawfully detained and denied a lawyer at will, they why and the hell would any Canadian want to go there to visit?

In contrast Justin Trudeau is being billed as the anti Trump. Thank God for that.

My second point is that this is indeed a circus side show. Don't vote for this raging lunatic, vote for the dirty crook instead. That's what we are looking at when he look to Hillary Clinton or Jeb Bush as alternatives. Have we forgotten the Bush Clinton fraud already? It all started in Mena, Arkansas when Bill Clinton was governor. Hillary Clinton's law firm were up to their eyeballs in it.

Al Martin claimed that Jeb Bush instructed him to commit investment fraud to raise money for Iran contra. The Bush family have been involved in investment fraud and crashing banks for generations. Buyer Beware. Don't jump out of the frying pan into the fire.

Donald Trump’s business disaster is worse than you think. 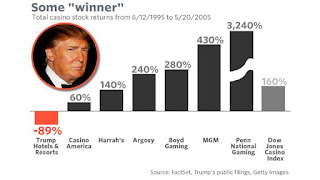