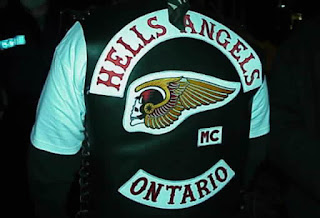 The Vancouver Province is reporting that a B.C. man who is now a member of the Nomads chapter of the Ontario Hells Angels has been arrested in Vancouver. Damion Ryan was out on bail on drug and weapons charges filed in the Ottawa area when he was picked up by Vancouver police on Jan. 29. His parole violations were drinking and using a cell phone. Pretty minor offenses. However, this is a member of the Hells Angels who was arrested on drug and firearm charges and is an associate of Dean Wiwchar, who’s a suspect in the 2012 Duhre murder..

Dean Wiwchar was also charged with drug trafficking along with another Hells Angels associate named Rabih Alkhalil. Rabih Alkhalil is Dean Wiwchar's co accused in the murder of Johnnie Raposo in Toronto and in the Sheraton Wall Centre murder of Sandip Duhre in Vancouver. Nic Nero is another drug dealing Hells Angels associate Dean and Rabih are accused of contracting in the Johnnie Raposo murder. Philip Juan Ley pleaded guilty to firearm charges in another case that involved Dean Wiwchar

Damion Ryan’s name surfaced last year in a B.C. Supreme Court ruling in a gun case involving his associate Dean Wiwchar. Ryan accompanied Wiwchar and his co-accused Philip Juan Ley, to Mexico on April 18, 2012. Drug dealers murdering rival drug dealers. There is nothing innocent about that. Damion Ryan was wounded in a gangland shooting at an Oak Street restaurant in Vancouver on Dec. 12, 2010.