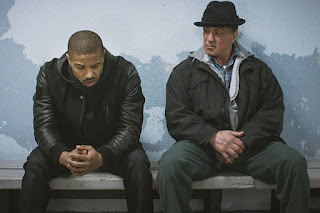 Sylvester Stallone didn't win an Oscar but he did win a Golden Globe award for his role as supporing actor in the moive Creed which was indeed epic. Tragic that Michael Jordan wasn't nominated for anything but when push comes to shove the fact remains he did an amazing job. No plastic award will change that. Creed was a great movie.

I don't normally watch the yuppie award shows but I wanted to see if Stallone won. Chris Rock was funny but some of the jokes were a bit over the top. Some of the horrible things that happened to Black people in the past are nothing to joke about. They obviously were scripting him to address the hard feelings and threatened boycott for not nominating any Black people this year. I think all the drama on both sides of the argument is extreme. It's like the first woman in space who told all the interviwers it was a shame they were making such a big deal about her accomplishment. Men and Women are equal. You making a big deal about this implies they aren't.

Joking about Black people getting shot by cops is in bad taste. The Rodney King beating was totally unacceptable. To think that kind of behavior can continue in our age diminishes all of us. We need to move forward and move past it. Rioting and looting is not the answer. Kevin Hart said it well. Tragic to hear Stallone lost his own son to heart disease in 2012. Peace.