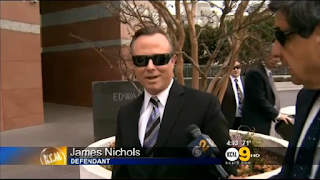 Reuters is reporting that "two Los Angeles Police Department officers have been charged with repeated sexual assaults on four women while on duty in their squad car and elsewhere, prosecutors and police said on Wednesday." That is messed up.

Cops who commit rape and bikers who sell crack are BOTH bad. Which brings us back to the Dianne Rock story. Dianne Rock claimed she was gang raped on the Pickton farm. That would imply more than one suspect. Janice Edwards testified that she picked up her friend Dianne Rock hysterical from a gas station with visible injuries after she was gang raped.

Dianne Rock claimed she was gang raped by bikers and police. Just ask Bob Paulson. He didn't believe her and that's why she left police custody and ended up dead. Will there ever ben a real missing womans inquirey? I doubt it. Too many people have too much to hide and I'm not just talking about Jim Brown. The media reported that off duty police officers attended parties at Piggy's Palace. Wally Oppal shut down the Missing Women Inquiry and turned it into a panel discussion where he could more easily censor evidence. Consequently we never did find out which police officer attended parties at Piggy's Palace. In fact, we'll never know.

Update: CBC is reporting that "The RCMP is scrambling to contain the fallout from bungled internal investigations into allegations of unwanted sexual touching, bullying and rampant nudity in the workplace at the explosives training unit of the Canadian Police College in Ottawa."

"In 2012, after a long investigation, the RCMP public complaints commission found rampant bullying in the police force. It unearthed 718 complaints filed by employees between 2005 and 2011, and found almost half the complaints were from men."

"In February 2013, RCMP Commissioner Bob Paulson vowed to take action in the face of growing public disgust with the conduct of some of his officers."

"Yet CBC News has spoken to four complainants, all former employees of the RCMP's explosives training unit, who maintain the information is not new at all. The men say they tried to share accounts of other disturbing behaviour at the school in 2014 and 2015, but RCMP investigators didn't want to hear it." So Bob Paulson is clearly full of sh*t.

Tell me again why the Main Stream Media hates the CBC and aren't running this story?