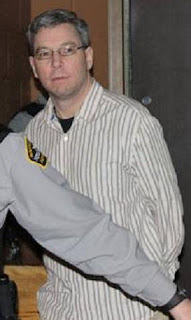 The Nova News is reporting that there has been another delay in Leslie Douglas Greenwood's new murder trial since one of his lawyers has withdrawn from the case. "Greenwood is charged with the first-degree murders of Barry Kirk Mersereau and Nancy Paula Christensen. The couple was shot to death in their Centre Burlington, Hants County home in September 2000. It’s alleged that the double murder was connected to the Hells Angels. Greenwood was convicted of the Centre Burlington murders following a three-week Supreme Court jury trial concluding in May 2012. The convictions were later overturned in September 2014 by the Court of Appeals. That decision stemmed from the use of hearsay evidence in the first trial.

The Chronicle Herald reported that Last month, Greenwood's trial for his role in two killings in a McDonald’s parking lot in 2010 ended in a mistrial. In this case, "Michael Lawrence and Curtis Blair Lynds — entered guilty pleas to killing Mersereau and Christensen, who were shot to death inside their Centre Burlington, Hants County, home. Lawrence also pleaded guilty to killing Charles Maddison, 75, and is serving life. Greenwood, who said in an interview that he started selling LSD at age 13, was a known associate of former Hells Angel Jeffrey Albert Lynds and was picked up — along with several others — after Lynds gave several statements to investigators in the spring of 2010. Those statements ended up leading to arrests in another two killings, including that of Randy Mersereau, Barry’s brother, who was gunned down earlier in 2000.

The Truro Daily reported that the Hells Angels ordered the killings as a payment for Greenwood and Michael Lawrence's drug debt. Jeff Lynds admitted to Randy's murder for the Hells Angels but was not charged for that offense. He is said to have committed suicide in prison. CBC reports that Lynds says he lured Mersereau to the home and claims he shot Mersereau five times with a hand gun provided by the Hells Angels who ordered the hit.

Randy Mersereau was a Hells Angel who sold drugs. He continued to sell drugs after he left the club so he was murdered along with his brother and his brother's wife. The three common elements of all these recent news stories are 1) the Hells Angels 2) Drug dealing and 3) Murder. The murder of rival drug dealers on occasion to forgive a drug debt. I.E. if you commit a murder for the Hells Angels you can have your drug debt forgiven as in the Britney Irving case.