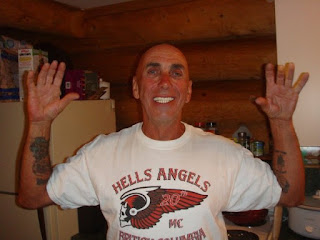 Kim Bolan is reporting that the publication ban on David Giles' trial has finally been lifted and that his co accused Kevin Van Kalkeren pleaded guilty to conspiracy to import cocaine earlier this year. Kevin is to be sentenced March 18.

Trolls were claiming Kevin Van Kalkeren was the ring leader and that Giles was working for him. That is absurd. It was the other way around just like how Revel and Remple worked for Giles. In her article Kim states: "Suitcases stuffed with millions handed over at a Vancouver hotel. Cryptic text messages about massive cocaine deliveries. Secret meetings from Vancouver to Panama City. Over a series of meetings with the principal conspirators, the RCMP undercover officers obtained approximately $4 million cash in exchange for 200 kilograms of cocaine.”

This is why I said right from the beginning that trial reminded me of an old Van Halen song. The name of the song I linked to was Panama. The brainless trolls just couldn't figure it out.

Since the publication ban has been lifted and since Kim has cited Panama, I'm going to tell a story I have been wanting to tell for quite some time. I did attend the trial a couple of times on my days off. On one occasion I was the only spectator in the courtroom and Giles turned around looking right at me. I thought it was appropriate he see my face so he knows who to look for at the judgement bar of God when this life is over. I have a lot more to say then.

During the trial there was someone on the stand being questioned in Spanish. I asked the sheriff who that was and he said it was the attorney general of Panama. I was somewhat surprised. Why was a government official from Panama acting like a hostile witness? It was very strange. Turns out the attorney general for Panama is a woman so this must have been someone else.

I returned durirng a break after putting more coins in the parking meter since I was just passing through and happened to be in court that day. I saw the government official from Panama outside the courtroom with a lawyer and several supporters. I wanted to ask crown counsel about the status of publication bans and asked are you crown counsel? No he said they are right over there and pointed to a male and female. I turned and looked at him and the crew he was hanging out with. I said to myself what and the hell is a government official from Panama doing hanging out with the defense counsel and all the defense's supporters? It was suspicious as f*ck.

I will point out that this bust back in 2012 was huge. Prior to that Giles seemed untouchable. He got off scot free after being caught on wire bragging about how much money Revell was making him selling cocaine. His lawyer at the time argued that he didn't actually say what Revell did to earn the money so he got off. Another example of a corupt court. Neil Hall attended the E Pandora trial and claimed that David Giles was implicated in the Western Wind bust. The one where two and a half tons of cocaine bound for the BC Hells Angels were seized by US authorities and thanks to Richard Barszczewski, no charges were ever laid.

That's why I billed Giles as Skellator, lord of the underworld. He was even on the history channel with Mom Boucher after Boucher got out of jail on a technicality. His fisrt stolen motorcylce was after his "brothers" were murdered in the Lennoxville massacre. David Giles was a complete villain. History has recored that. Giles' arrest after putting the pressure on during the Kelowna Summer Jam was a huge success. The fact that he never made bail was priceless.

Recently there was another colossal arrest. This time of an Edmonton Hells Angel named Dominic DiPalma Jr. In 2014 I named him as the sole member in charge of the entre Whiteboy Posse in Alberta. Now everything I said in that post has come true. 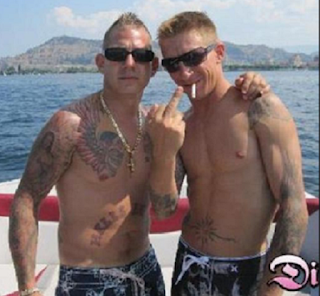 Not to say I told ya so but I did. Since a couple of trolls have been insanely relentless trying to shut me down, it has become clear why I should keep things going. Yet as I said on my return things have changed. I am no longer posting inside tips on crime. I'm just reporting on crime in the news. I did what I did, I said what I said. It was for a purpose and now it is time to move ahead. I don't give a rat's ass what a sleazebag troll has to say. I just put their e-mail to spam and move on. Wherever there is truth there is opposition to it and these two recent stories about David Giles and Dominic DiPalma Jr prove there is a method to my madness and when push comes to shove, I may well be a broke ass bitch but I still rather be me. Word.