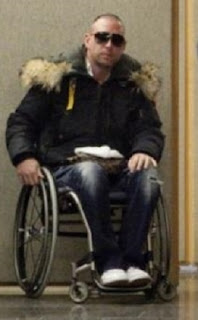 Larry is from here so he's multicultural. He's good for coercing minorities like Randy Naicker who was also shot dead in Vancouver. However, Larry certainly isn't the brains of the operation like Randy Jones over here is. Obviously someone else higher up was in charge in Montreal and Larry is the fall guy for it. A little je me souvien for the canuck non?

Likewise I'm going to have to question the validity of Shane Maloney's ties to the West End gang in Montreal and just how big that organization is today. No doubt it was huge in the early 1900's up until the /70's and the /80's. Just how prevalent they are now is what I'm questioning. It makes for great drama but I'm not sure how reality based it really is.

As previously reported Shane is in a wheelchair that's why they call him wheels. He says he was injured in a motorcycle accident. One outlet claimed it was a snowmobile accident here in BC. Yet locals claim it was something else. I'd like to find out for sure because it sounds awfully fishy to me. But then again, I'm just a cynical old man. Jimmy Cournoyer was no kingpin either.

All I know is that he was hanging out with some dirty cops from Quebec down in Mexico.