The Aging Rebel on Asset Forfeiture 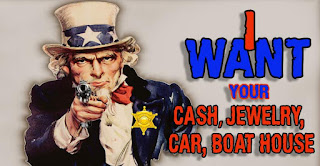 A blog reader just sent me a link to this timely article on Asset Forfeiture from the Aging Rebel's blog. I have a lot of respect for the Aging Rebel. He's a smart man that is familiar with the US Courts. The subject of civl forfeiture has come up in Canada and for the most part we have been for it. It's all about reducing the proceeds of crime. The problem is who's the bigger criminal? The criminal or the government stealing from the criminal?

This dilemma was made very clear in Freeway Ricky's movie Crack in the System. In that documentary which is tied directly to the Gary Webb story, they interviewed a DEA agent who admitted after the CIA pulled the plug on the Oscar Blandón bust they were all on the take. The DEA agent admitted the new directive wasn't to get drugs off the streets, it was to seize as much drug money as they could to fund operations letting them keep finder fees for themselves.

The CIA ended up corrupting the whole lot of them. It's also reminiscent of the Documentary on New York Cop Corruption in the /80's called the Seven Five named after the 75th precinct that was dirty as f*ck. So the CIA are the ones bringing the drugs into the country and every other agency under the sun wants a piece of the pie. Now Donald Trump wants in too.

Seemingly in the States they can seize assets without a criminal conviction. Now that's criminal.