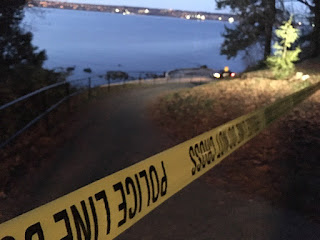 1130 News is reporting that "Vancouver Police say a 61-year-old man stabbed on the Stanley Park seawall last night died at the scene. A person of interest is in custody and police are trying to figure out if that person played a role in the man’s death. The VPD also says it’s too early in the investigation to know whether the killing was random or targeted." CBC is reporting that the body was found between 2nd and 3rd beach.