Justin Trudeau kills the Charter of Rights yet again 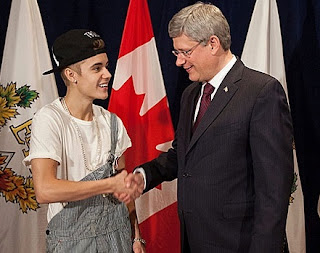 Justin Trudeau just pulled a Stephen Harper again. Big surprise. The cross border policing insanity has returned to the table under the disguise of the dark master. CBC is reporting that U.S. border guards would get new powers to question, search and even detain Canadian citizens on Canadian soil under a bill proposed by the Liberal government.

So tell me has Justin Beiber agreed to give US Agents diplomatic immunity while on Canadian soil as well? That was their concern before. Since Canadian officers can actually get charged with murder in Canada if they do in fact commit murder, US Police didn't want to be bound by Canadian law while armed in Canada. They wanted diplomatic immunity. I kid you not. That is insanity at best. You never arm a foreign police force to patrol your country then give them diplomatic immunity to break the law they are supposed to enforce. This reveals the true character of Justin Trudeau behind all the smoke and mirrors.

CBC is reporting that Legal experts say Bill C-23, introduced by Public Safety Minister Ralph Goodale, and likely to pass in the current sitting of Parliament, could also erode the standing of Canadian permanent residents by threatening their automatic right to enter Canada. The bill would enshrine in law a reciprocal agreement for customs and immigration pre-clearance signed by the governments of Stephen Harper and Barack Obama in 2015. Both houses of Congress passed the U.S. version of the bill in December.

"A Canadian going to the U.S. through a pre-clearance area [on Canadian soil] can say: 'I don't like the way [an interview is] going and I've chosen not to visit your country.' And they can just turn around and walk out. Under the new proposed bill, they wouldn't be able to walk out. They can be held and forced to answer questions."

CBC is also reporting that one of those question is about your religious affiliation.

These politicians are the real enemies of the constitution. They have broken their oath to defend it. God help us. No one else will. Vote number 666 has returned to the table. This is how liberty dies. Watch Press for Truth Video: The Trudeau Deception