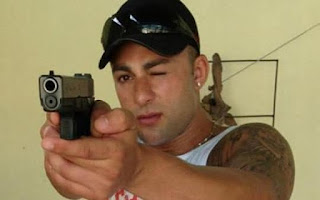 The British Telegraph is reporting that "a 28-year-old Australian man has been sentenced to death in Thailand for the murder of an Australian Hell’s Angel motorcycle gang member at a coastal resort town. A Thai court found Antonio Bagnato, a kickboxer, killed Australian underworld figure Wayne Schneider after kidnapping him from outside his luxury villa complex in Pattaya, south-east of Bangkok. He and Bagnato were former partners in a Sydney boxing gym and were reportedly under investigation in Australia over international drug deals. Bagnato had previously been the dead man’s bodyguard."

The Daily Record is reporting that it was a former member of the Hells Angels. "Wayne Schneider fell out with Hells Angels members in Australia and fled to Thailand only to be killed by drug dealer Antonio Bagnato." AFFA. Angels Forever Forever Angels or until we decide to put cap in your ass. With friends like that, who needs enemies?

The Daily Telegraph is reporting that Wayne Schneider was the full patch Australian Hells Angel who oversaw a puppet club called DLASTHR which was founded by Hells Angels associate Raphael Joseph. They were involved with a multimillion dollar drug ring in Thailand. Raphael was also killed by someone he knew.