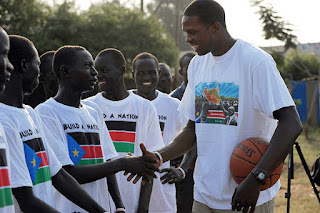 Turns out that Trumps travel ban affects some NBA players from Sudan. What on earth has he got against Sudan? Netflix has a movie called the Lost Boys of Sudan describing some of the hardhsips many young kids faced fleeing war torn Sudan and coming to America as refugees.

I'm going to share a real life story about a family of refugees from Sudan my kids grew up with in Surrey. When my kids were very young we moved back to Surrey for them to start elementary school. The school had a big buddy program where they would pair up an older kid with a younger kid just starting out. They would meet during class time and form a friendship so the younger kid wouldn't feel so scared and had someone older to look out for them on the playground.

My son's big buddie was named Mamoosh. His family were refugees from Sudan and lived in the same complex we did so they continued that friendship after school. Mamoosh had a sister named Mimi who was friends with my daughter. The father was a hard working professional.

Then the day came for Mamoosh and his family to move. My son was heartbroken. When he heard the news I saw the shock on his face. He quickly went home and went to his room to be alone. I noticed the urgency and followed him to see what he was doing. He was sitting in his room weeping. He was very young. He wasn't being a drama queen. He just wanted to be alone and grieve in private the loss of a dear friend. That is how much that friendship meant to him. 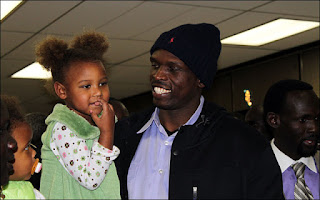 Update: Turns out Mamoosh's family was from Ethiopia not Sudan but the point remains valid. Diversity makes us strong. "I've seen too much hate to want to hate and every time I see it I say to myself that hate is too great a burden to bear." Martin Luther King

The Huffington Post is reporting that "A stunned former prime minister of Norway complained that he was caught up in the maw of Donald Trump’s controversial executive order and detained this week by border agents at Washington’s Dulles International Airport because he visited Iran in 2014. Kjell Magne Bondevik said that after he landed at Dulles on Tuesday he was herded into a room with a group of travelers from the Middle East and Africa. He was ordered to wait for 40 minutes, then questioned for another 20 after officials spotted a travel stamp on his passport revealing that he had flown to Iran three years ago, reported WJLA-TV. The passport also clearly identified him as a former prime minister of Norway, he said."

The Daily Mail is reporting that Angelina Jolie has written an article in the New York Times about Donald Trump's immigration ban. "'Refugees are men, women and children caught in the fury of war, or the cross hairs of persecution. 'Far from being terrorists, they are often the victims of terrorism themselves', she wrote.

Reuters is reporting that A federal judge on Friday put a nationwide block on U.S. President Donald Trump's week-old executive order temporarily barring refugees and nationals from seven countries from entering the United States. The White House said late on Friday it believed the ban to be "lawful and appropriate" and said the U.S. Department of Justice would file an emergency motion to stop the judge's order taking effect.

The Seattle judge's ruling takes effect because it considered the broad constitutionality of Trump's order. Robart also explicitly made his ruling apply across the country, while other judges facing similar cases have so far issued orders concerning only specific individuals. Washington Governor Jay Inslee celebrated the decision as a victory for the state, adding: "no person - not even the president - is above the law."

Posted by Dennis Watson at 2:33 AM