The Canadian approach to Immigration 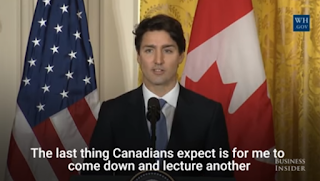 In a joint press conference Prime Minister Justin Trudeau was asked by a reporter if he felt President Donald Trumps' policy on immigration had merit on national security grounds. Justin Trudeau responded by saying:

"The last thing Canadians expect is for me to come down and lecture another country on how they chose to govern themselves. My role and our responsibility is to continue to govern in such a way that reflects Canada's approach and be a positive example in the world."

Without opening a huge can of worms in the polarized Trump conflict, I will simply state that he was fairly elected and I support the democratic process. I don't agree with his policy on immigration because they aren't just targeting criminals and drug lords they are going after everyone including women and children. That's not the type of society I personally want to live in.

Having said that we in Canada are going to have to amend our policy to deal with the flood of new immigrants by issuing temporary work permits. We could set up refugee camps in rural areas and give them all temporary work visas to work in the construction industry to build them all homes to live in. We can make this work. Giving boatloads of refugees free medical and free welfare will indeed bankrupt our great nation. Giving new immigrants temporary work visas will be a win win situation for everyone. Our economy will thrive.

In a separate post I will once again discuss the polarized extremes that we see emerging between the left and the right. In my opinion the extreme left is no better and ultimately no different than the extreme right. Both extremes end up in the same place. With regards to the differences between the current Canadian and American policies on immigration I will simply say you take the low road, we'll take the high road and we'll be in the Promised Land before ye. Peace. 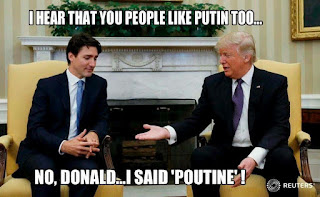