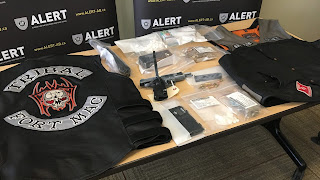 My McMurray is reporting that Members of the Tribal and Syndicate outlaw motorcycle groups have been arrested in Fort McMurray following a drug trafficking investigation. Darren Paulson, a 49-year-old Tribal member and Thomas George, a 28-year-old Red Deer Syndicate member are both facing multiple charges related to trafficking. Police seized a trace amount of cocaine, magic mushrooms and a loaded handgun with the serial number filed off.

As we previously reported, Rick Levesque, the not so bright left over from the Ontario Nomads is in charge of the Syndicate in Fort McMurray. The bust is significant because it shows that the Alberta Gang Task force is keeping he pressure on as is the Ontario Biker Enforement Unit unlike Christy Clark's reorganized gang promotion unit in BC.