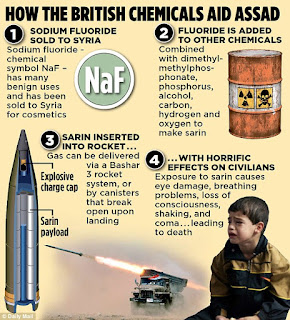 Global News is reporting that "Dozens of people, many of them children, died in a nerve-gas attack in a rebel-held city in Syria this week." That we know. What is uncertain is where the chemical weapons actually came from. The Guardian is reporting that "Evidence that the sarin nerve agent was used in the chemical attack that killed more than 80 and injured hundreds of others in Syria’s northern province of Idlib last week has triggered awkward questions for the government over the part played by the UK in the Assad regime’s development of a chemical weapons programme." This comes as no surprise.

In the September 2013 attack Reuters reported that CIA fabricated evidence to lure US into war with Syria. That is what Ray McGovern, a veteran CIA analyst, told RT. After the September 2013 attack Reuters reported that McGovern was among the signatories to the letter from veteran intelligence professionals to Obama, warning the US president that Assad is not responsible for the chemical attack, and that “CIA Director John Brennan is perpetrating a pre-Iraq-War-type fraud on members of Congress, the media, [and] the public.”

Every crime has a means and a motive. Do I believe Assad would use chemical weapons on his own people? Yes I do. You don't buy chemical weapons without the intent of using them. Do I believe he did use them? I'm not so sure. It is possible but it seems unlikely to me. Why would he risk creating a public uproar when everything seemed to be going his way?

This declassified document from the CIA's own web site outlines the CIA's rationalization for getting rid of Assad. It is sheer propaganda but it shows how determined they are to get rid of him to perpetuate US interests. The document shows some of the things the CIA is willing to do to overthrow Assad. It is a list of ploys similar to Operation Ajax in Iran.

Do I believe the CIA would use chemical weapons in Syria and blame it on Assad? I most certainly do. They did it in 2013, they would not hesitate to do it again.

Now Justin Trudeau is pulling a Nicolas Sarkozy. On New Years Justin Trudeau was burning tax dollars fast and furiously on Aga Khan's private island. His Highness the Aga Khan supports Assad. Now all of a sudden Justin Trudeau says Assad has to go. That's kind of like what Nicolas Sarkozy, le chinen sal, did to Muammar Gaddafi. One minute Sarkozy is trying to convince the world to trust Gaddafi with nuclear weapons so he can sell him a French reactor, then as soon as Gaddafi decides to buy a reactor from Argentina instead of France, all of a sudden he's a bad guy and we should invade and murder him. That was a dirty deed.

The Agency will argue that Gaddafi was bad, he bombed Pan Am flight 103, over Lockerbie, Scotland. First, no he didn't. Second, that was before Sarkozy was accepting campaign contributions from him trying to convince the world we should trust Gaddafi with nuclear weapons. The Lockerbie bombing didn't seem to matter to Sarkozy as long as he was getting campaign contributions from him and was planning on selling him a French reactor. Gaddafi didn't have a motive to bomb Pan Am flight 103. He would have preferred the US whistleblowers that were on board that flight with evidence of the CIA's drug trafficking in Lebanon arrived safely to blow the whistle on the CIA. Gaddafi wanted them to arrive safely. The only ones who did was the CIA. 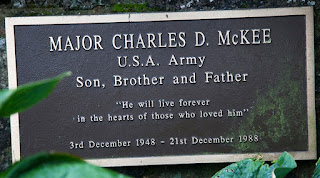