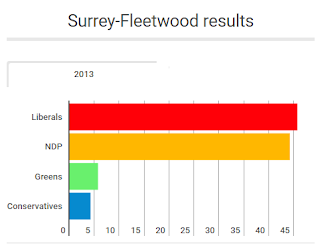 Local media are somewhat pessimistic about Peter Fassbender's reelection chances after dropping the ball since he was narrowly elected last term. He is one of Christy Clarks insiders and created quite a division within the Liberal party after Christy Clark let him hijack the nomination process and run without being nominated and elected by the party.

James Plett was the Vice President of the Surrey Tynehead riding association of the BC Liberals at the time and resigned as a result of the sweetheart deal claiming on Twitter that he was 'Sick of "Today's @bcliberals" corruption + scandal after scandal. Worse than the BC NDP of yesteryear. I quit effective now #bcpoli'

As mayor of Langley Fassbender was part of the Metro Vancouver Mayors gluten counsel that epitomized the tax and spend model of pork barrel politics. While he was mayor he sat on a committee overseeing the RCMP contract negotiations when his son was a member of the RCMP. As a result he was quickly promoted within Christy Clark's insider trading group.

After he was elected MLA he pissed off all the teachers by bypassing the collective bargaining process and emailing all the teachers directly trying to explain why they were wasting massive amounts of tax dollars on court fees justifying their illegal acts instead of paying a fair contract. He helped Christy Clark burn massive amounts of tax dollars in a legal battle which they lost for knowlingly breaking the law. That act of arrogance defied reason.

After that fiasco he was quickly shuffled over to the minister of Translink position where he perpetuated the Mayor's Glutton councils tax and spend fraud by trying to introduce a tax levy on all businesses that were located near a skytrain station. More taxes on small business. That is their MO. Most recently he started raising eyebrows by handing out tax dollars to constituents from his campaign office.

I live in Peter Fassbender's riding. I didn't vote for him last time and I most certainly am not voting for him this time. We need to elect a government that supports small business not one that chokes them unconscious with more tax and spend gluttony like the BC Liberals have done. Ever heard the term from Shakespeare me thinks thou doth protest too much? It's when someone's raging denial becomes so passionate it becomes suspicious. When the BC Liberals claim the NDP will tax and spend we know they are the real offenders of tax gluttony not the NDP.

As for the rest of Surrey The Vancouver Sun is reporting that On the NDP side, MLAs Harry Bains (Surrey-Newton), Sue Hammell (Surrey-Green Timbers) and Bruce Ralston (Surrey-Whalley) have said they’re running again in what is considered comfortable New Democrat territory for the multi-term incumbents."