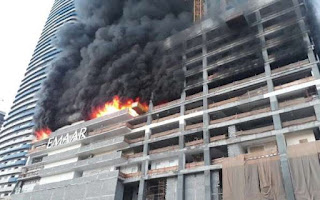 The Telegraph is reporting that "an inferno burned early Sunday in a high-rise tower complex being built alongside Dubai's largest mall, its thick black smoke shrouding surrounding buildings in a desert metropolis where skyscraper blazes remain a worry. Though authorities said the fire caused no injuries, the blaze happened just a block away from the 63-story The Address Downtown Dubai tower, which burned in an inferno seen around the world on New Year's Eve on 2015." The 2015 fire was referred to as an inferno. There have been many others. 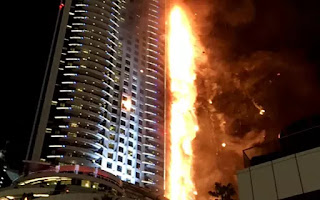 Remember the movie the towering inferno? All these steel framed towers catch on fire and none of them collapse. Imagine that. The third tower collapsing into it's own blueprint at freefall speed was unprecedented. Experts in the field boldly declare the only way that can happen is if the load bearing beams are blown out just like in a controlled demolition - The Recurring Deception.